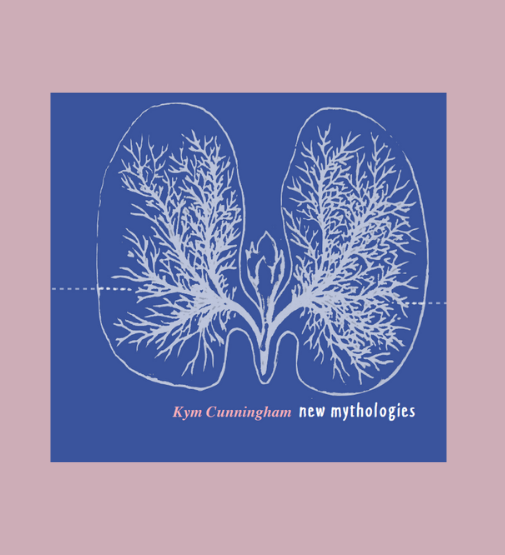 2 in stock (can be backordered)

“new mythologies reads like an ancient text encoded with secret wisdom, tacit  magics, and the body’s truths. Cunningham reminds me that the shape shifter shifts shapes at her/their own pace in this series of poems that astonishingly generate their own occasion. Through syntactical infidelity, Cunningham cracks the briny shell of language in order to bring forth a vibrational being, a roux ga roux moving neither inward nor outward but allward. Accept the invocation; melt into the murmuration.”

“How does one attempt to make sense of meaning that refuses itself? How does one orient the self to past and future logics while in the throes of something as temporally recursive and rebellious as grief? In new mythologies, Kym Cunningham shines a haunting light on the ways in which language, for all its use and beauty, inevitably fails us in these moments, expertly concealing, omitting, and de-/re- constructing it not to only make meaning but obscure it. The myths Cunningham creates are similarly crafted, their bodies containers that, like language, cannot fully contain: they are the place “atwhich pastandfuture / didnotmerge somuchas ceasetoholdmeaning;” not so much “absence butsmoke whathappens intheafter lingers.”

– Raye Hendrix, Poetry Editor for Press Pause Press and the author of the chapbooks Every Journal is a Plague Journal (Bottlecap Press) and Fire Sermons (Ghost City Press).

“In Cunningham’s mythoi, words are conjoined, shipwrecked, and turned face-down, cleaved and reassembled into new forms—remble, howth, inecho, ofherself. Reading this book felt like birdwatching in a lush forest; I invite you to read these poems slowly, to hold them like water in your hands.”

– Annelyse Gelman, author of Everyone I Love is a Stranger to Someone (Write Bloody Press), Fulbright Fellow, and developer of Midst, an interactive timelapse poetry project.

“Kym Cunningham’s stunning chapbook new mythologies, collapses the architecture of the given and offers us new, enlivening language out of the rubble. Vested in the politics of the possible, new mythologies asks us to see ‘whatiserased’ by patriarchal white supremacy from the foundational narratives that structure thought. In doing so, Cunningham takes a linguistic jackhammer to the rigid mono-discourses that trap their speakers, in order to make new, shape-shifting, poly-myths both to question and live by. Through cinching the white space between some words, bursting apart sentences at the syllable-level with mid-word caesuras, continually re-examining the tension between words and white space, and pushing back against the opacity of lithographic text itself, Cunningham re-ignites the excitement of poetic thinking. As if ‘inerosivecaress,’ new mythologies is an act of fierce tenderness that attempts to undo the strictures of the inherited in the same breath as it binds us to language’s gift: a new sociality.”