Until We’re No Longer Real

You stand in front of the ocean, patiently waiting for the waveforms to resolve themselves so that you might easily dive in. Many years ago, you were led to believe that submersion would set you free, but after many failed attempts you have begun to believe the opposite is true. The hope of becoming lost overwhelms you. The door to a cage is subject to whimsical ambitions and can only be unlocked by those willing to conquer. There is the ocean, of course, that’s how narratives are built. But there is also the intertidal zone, a sort of purgatory where the artist’s position cannot be questioned. Three poets join you on the beach.

The first poet is a woman who you went to the MFA program with. She wears a tee-shirt which says, Don’t throw the small ones back, they taste the best. She is best known for a manuscript in which the protagonist’s husband transforms into a sea anemone and in the process becomes a more thoughtful companion. She sifts her fingers through the weedy rock pools and says “Never have so many lived in order that so few could die.”

The second poet is constantly dousing things in fuel in order to set fires. He refers to himself as a professional arsonist and claims that, contrary to popular opinion, Icarus actually did reach the sun. “Why do you think it disappears behind the other side of the planet every damn day?” He answers his own question: “It’s embarrassed.” The sun, according to this thesis, is constantly trying to rewind time. “That’s why things move so fast.” That’s why we’re constantly bound by the details of our own descriptions. He has wrapped a piece of blue elastic fabric around his wrist. There is a scarf or bandana tied around his neck. He asks you to describe what cannot be described and offers untranslatable codes as a supposed method of assistance.

The third poet isn’t a poet at all, but a stick-like creature composed of a bright yellow light who is not beholden to our laws of gravity. Like the planet they come from, theirs is a haphazard orbit; but one from which escape is impossible. Their poems are bewildering. After you read them you think, There is a certain way a certain somebody looks at you. This creature taps on your shoulder and points behind you: The cliffs are coated in brilliant sunshine. Along the boulevard, a cadre of non-descript cars slot evenly into diagonal parking spaces. The houses cascade from the top of the hill in a formal arrangement down to the bottom. The way in which things were designed in the past has an unwritten agenda for the way things will unfold in the future. In other words, we will always be doomed to rent. To the left, the shapes repeat themselves in a series of concentric, beguiling circles. There is a propensity to stack things. The walls of rock are covered in thick layers of sediment.

Together, the four of you begin to walk towards the water. You’ve become separated from your own language via wordless control mechanisms and deviations from standard biologic functions. You can’t help but think that attaining this mastery is its own kind of fortress. The water is warmer than you expected. Disappointingly so. One of you, you can’t be sure who, says, “I no longer recognize the person I’ve become.” Like all good cartographers, we understand what it means to throw the map into the water—to shade inaccessible areas in green and blue. 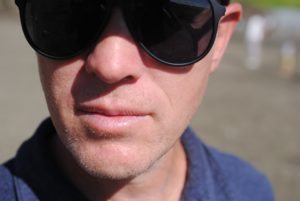 Craig Foltz is a writer and photographer whose work has appeared in numerous journals, most recently Fence and Reality Beach and is forthcoming in They Said: A Multi-genre Anthology of Contemporary Collaborative Writing (Black Lawrence Press). He has released two books on Ugly Duckling Presse. He currently lives and works on the slopes of a dormant volcano in Auckland New Zealand. Send collaborative proposals to: craig.foltz@gmail.com