the cloud slowly spread. an invisible yellow. it could not be seen with the human eye nor even from space but perhaps only on a radar map or read with a gauge of some sort. but it did spread. so. stability is a fiction. bodies tend to propagate. watch a weather map as a system passes or as a storm out at sea begins to form or coalesces with another and both take on new dimensions. bodies tend to propagate. we are an exceedingly exposed species. this was perhaps the thing about ourselves we learned too late and too slowly: our bodies are who we are, and those bodies are exposure itself. we listen. we see. we taste and smell. we feel. a locus of perception. a locus of exposure. on a map this yellow invisible body was objective and distant, a thing we could monitor almost clinically. but the language of this monitoring was itself a way of covering over our exposed existence, and these methods only work for a time. then the bodies pile up. the perception becomes warped. that yellow invisible cloud could now be seen on another map: the animal body. the human body is an animal body – now, finally, we can no longer pretend otherwise. on the animal bodies the yellow invisible cloud manifested its presence in sickness, in deformity, in rapid changes that transformed the body. but there, too, we became aware of our reliance on a method of description, for ‘sickness,’ for ‘deformity,’ were only terms that were relative to a particular mindset. stability is a fiction. even before the cloud our bodies shifted constantly: we lost hair, lost skin, aged, produced and eliminated urine and feces. the list goes on. the yellow invisible cloud simply heightened the changes, sped up and altered some of the processes. in essence, we took a hand in our own development, our own evolution, while the cloud continued to spread. 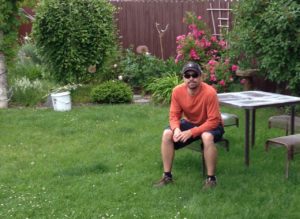 Clark Chatlain has published poems and prose in several journals, most recently the anthology Poets Across the Big Sky II and the journals Ink & Voices, Minute Magazine, and Burning House Press. He currently lives and works in Missoula, Montana. He blogs at microproseblog.wordpress.com.