Universe cackles. Oh, Logan, she says. Oh, sweet, naive, blonde Logan. I have no doubt that it will be so easy to make you feel as hurt and humiliated as you have made so many others feel. The bigger they are, the harder they fall, and all that.

Logan disappears for a few weeks. Universe watches, waiting. She knows she must wait for the perfect moment to pounce. An ill-timed event won’t do any good. Then one day, Universe notices that Logan is going to the airport to parachute.

Universe bounces up and down in excitement as she perches on an empty seat across from Logan and his crew in the plane. The old cut-the-parachute trick is on her bucket list of plans to do to truly terrible people, but she’s found that in general, terrible people rarely tempt her by jumping out of a plane. They tend to stick low to the ground, like snakes, or cockroaches. Not Logan, though.

He pulls the cord. Nothing. Logan starts panicking, and much to Universe’s surprise, he remembers relatively quickly that he has a spare chute. He pulls that cord; it works; he lands, alive. He’s shocked, but he gets over it. Maybe his reaction is just delayed.

Universe is a little disappointed that Logan didn’t die, but what she really wants is an existential crisis. She blocks out the next few days on her calendar to follow Logan around and enjoy seeing him break down.

When the internet hears about the whole parachute thing, they think it’s hilarious and tragic. They ask, why didn’t you just kill him, Universe? Why not get it over with?

But her plan doesn’t work. She follows Logan around for four days—even goes so far as to sleep at his house in case he wakes up in tears in the middle of the night—but he isn’t affected. Most people would take such a life-changing event as, well, life-changing. But the near-death experience doesn’t seem to register with Logan. He views it as free publicity, and sympathetic publicity at that. Universe shakes her head. She’ll have to plan something better; but what? If she couldn’t make him consider his own mortality and existence, maybe she could make him sad, at least?

Universe encourages two men to break into Logan’s house when he’s out filming a video. The robbers are a bit unprepared; the grabber doesn’t know how to get out of the house once he hears that Logan is home. Logan finds him within five minutes. The driver drives away with several of Logan’s highly prized (and highly priced) possessions.

Universe watches Logan closely in the police station. He manages to keep his cool with the officers, but Universe is sure that he’ll lose it once he’s outside. All that stuff is gone, and the police warn him it’s hard to trace. But alone in his car, Logan’s chill. He talks to himself out loud, which at first Universe hopes is a sign that he’s getting unnerved, but he just likes hearing the sound of his own voice. Universe rolls her eyes in the backseat and listens as Logan recites, “You can buy new things, but you can’t buy new people, and I have lots of money.”

Universe cries herself to sleep that night on Logan’s couch. He is unaffected; is he even human? Surely she can prove that. Surely she can make him feel miserable, if nothing else.

Logan and his crew go out to eat at a well-known fast-food chain a few days later. Universe tags along and slips something into the lettuce while they’re live-streaming the experience. She schedules her next checkup on Logan for two days later. Nothing happens. On day three, one by one, his friends text in the group chat about how they’re dying. Literally, dying. A few go to the hospital in critical condition. But Logan is fine. He watches the texts roll in, responding occasionally with “that sux” or “sorry my man” but Universe can see that he doesn’t really care. He’s hours deep into a video game, and he starts ignoring the pings from his phone and focuses on the video game.

Universe does not understand why this does not affect Logan. She saw him eating the lettuce along with everyone else. She is coming to understand that Logan is in fact immune to the bacteria that originates from infected shit.

The next day, Logan is apathetic about his friends’ predicament. He hardly realizes they aren’t around. Universe makes herself a salad and sits at his kitchen table for a few hours, watching as he edits stuff. Logan spends a lot of time pausing on his face.

Universe dedicates a few hours on her Tuesday to think about the situation. Logan just didn’t seem to respond to facing death, whether his own or his friends’. He doesn’t care about material things, apparently, and he seems to be bacteria-resistant as well. She isn’t quite sure what does matter to him at this point. Universe devotes a full day to observing him, watching as he films himself and edits a video of his face all day; he uploads the video and sits in front of the computer screen, watching the YouTube page diligently. He even eats dinner in front of it, with his video on pause, watching the likes and comments and subscribes come in. With each subscribe, he does a little cheer. Universe watches and listens; now she knows what to do. It may work. If it doesn’t, she’s not sure what else she can do.

She waits until Logan uploads another video a few days later and sits down expectantly in front of his computer screen, waiting for that sweet external validation. Then Universe unleashes a deadly virus upon the earth, killing everyone—except Logan—within seconds. This will get him, she thinks. There’s no one to give him attention. With no one to please or frustrate, he’ll finally feel something. Universe sits down on Logan’s couch with a bowl of popcorn, smiling and tapping her foot impatiently as she waits for the realization to hit him.

But Logan watches as comments and likes fly in. People retweet and favorite his post about the video. There weren’t quite as many comments and likes as his last video, but hey, that’s fine. They can’t all go viral like that Japan one. Logan crawls into bed, happy and content.

Universe screams in frustration. Who was liking and commenting? Everyone was dead! She figures out that all the accounts that engaged with him are bots. Twitter bots, YouTube bots—all still functioning perfectly despite the fact that their programmers have snuffed it. Logan hadn’t even noticed that the accounts weren’t real.

Of course her plan didn’t work. It never did. These humans are so difficult to understand, much less manipulate and control, and now she has wasted them all on the worst of them just to teach him a lesson. A lesson he can’t learn. Universe sulks in the corner while Logan sleeps; she is determined to have one last attempt at making him feel something.

Universe stares out the window at the California coast. It’s so green, so full of life; but everyone is dead. Logan doesn’t seem to notice that anything is wrong. He drives along, grinning at himself in the rear view mirror occasionally. When he reaches the spot where he thinks he’s meeting his friend, Logan pulls over and start filming on Instagram Live. Universe watches as he brags about the view of the ocean from this cliff and how cool his video shoot today is going to be, as soon as his lame friend shows up. “Where is Ryan anyway, he’s always late! He’s probably at his girlfriend’s again.”

Universe sinks to her knees. Tears stream from her eyes. She had not thought it would come to this, but nothing she has done could make Logan feel regret, remorse, constipated, anything. Hell, he doesn’t even realize that he is the only man left on earth, that he is live-streaming to no one. Everyone is gone; there is no one left but him. If she could not make this one man feel, there was nothing else she could do.

Universe throws herself off the cliff. Other than a slight breeze as Universe falls in on herself, Logan feels nothing. 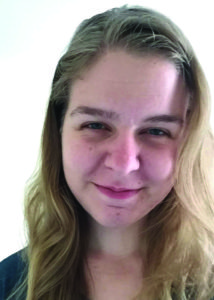 Carolina VonKampen graduated with a BA in English and history from Concordia University, Nebraska. She is an editor from nine to five and an editor, reader, and writer the rest of the time. Her work has appeared or is forthcoming in So to Speak, The Shallows, FIVE:2:ONE, Moonchild Magazine, and Déraciné Magazine. You can find her atcarolinavonkampen.com and on Twitter at @carolinamarie_v.